Made with a flaky biscuit dough, a sugary citrus filling and a zippy cream cheese drizzle, this Lemon Cinnamon Rolls biscuit recipe are a deliciously perfect way to enjoy a classic pastry in a new and exciting flavorful way WITH NO YEAST! If you love these, you will also love these Orange Cinnamon Rolls, Classic Cinnamon Rolls and Honey Butter Cinnamon Roll Biscuits! 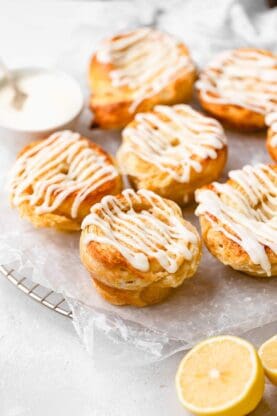 Okay, you may have come across this recipe and thought to yourself, “what the heck are Lemon Cinnamon Roll Biscuits?”. I don’t blame ya! This recipe is an interesting one in that it’s both heavily infused with tangy lemon flavor and it uses a biscuit dough as a base. A whole lot going on, I know.

But, today, I’m gonna ask you to trust me on this one. Each bite of these luscious rolls is cause for a celebratory jig! Buttery, chewy, light, tangy and sweet, these lemon rolls are like a mouthful of sunshine.

Try something a little different with me today, won’t you? 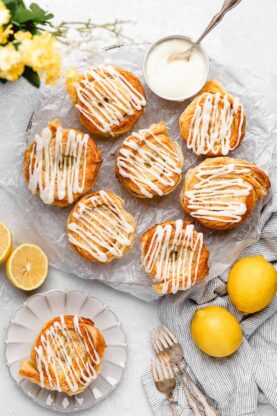 It’s no secret that I love cinnamon rolls (and make them often). Recently, I was looking to shake things up a bit and it dawned on me that I’d never attempted to use lemon in a breakfast type of food! Lemon is such a great flavor for spring, so I decided that it would be fun to make lemon rolls for a change. Y’all, I’ve been missing out!

This recipe uses 3 delicious components to create something fresh, unique and so incredibly delectable!

Lemon-Ginger Laminated Biscuit Dough- Biscuit dough is flaky, buttery and melt-in-your-mouth soft! If you prefer, a regular yeasted dough can be used but you’ll be missing out on this gloriously fluffy, doughy magic.

Lemon-Sugar Filling- This filling is nearly identical to that of a regular cinnamon rolls’! The addition of lemon zest ties together the different elements of this recipe and  creates a sugary, citrusy bite.

Lemon Cream Cheese Drizzle- Made with indulgent cream cheese, confectioner’s sugar and both lemon juice and zest, this drizzle is the POP this recipe so badly needed. This sticky-sweet layer takes these rolls to a whole new level of tasty!

TIP: If you’re not a fan of lemon, replace it with a citrus of your choice! Meyer lemon, lime, grapefruit and orange are all great options! 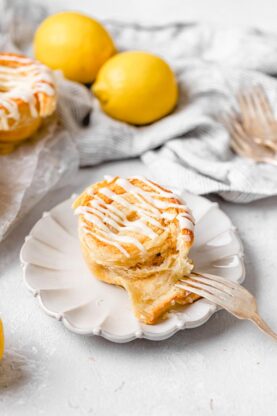 Cinnamon rolls made from scratch can be intimidating but, today, we’re gonna tackle this recipe head on. No fear. To give you a solid head start, I’ve compiled my top tips for the BEST Lemon Cinnamon Rolls EVER!

Keep the Biscuit Dough COLD (And Chill It Properly)

What separates these cinnamon rolls from the rest is the use of a biscuit dough rather than a regular yeasted on. Yeasted doughs require room temperature ingredients, while biscuit doughs call for cold ones (mostly the butter).

Cold butter helps to create layers within the dough itself; when baked, the butter will melt and form pockets of buttery, creamy goodness. I recommend freezing the sticks of butter for about 20 minutes before grating them.

Once the dough is ready, be sure to allow it enough time to chill. This extra step may seem redundant but it ensures the dough properly laminates and retains its layers.

Fill the Rolls from Edge to Edge

Don’t be stingy! Cover every square inch of the dough with cinnamon-sugar filling. You’ll only need to leave a small section along one edge bare so you’re able to pinch and seal the seam closed once you’ve rolled the dough.

Be sure to roll the dough as tightly as possible. The tighter you’re able to roll, the more buttery layers you’ll get. This will also ensure that the rolls keep their shape during baking.

If your knife isn’t sharp enough, it will squish the rolls and ruin their shape. Instead, loop a piece of dental floss around the dough and cut through the cinnamon rolls.  Make sure it is unflavored.

BONUS TIP: Let the rolls cool before icing! If the rolls are too hot, the icing will run right off of the rolls. Wait for at least 10 minutes before glazing, it’s worth it. 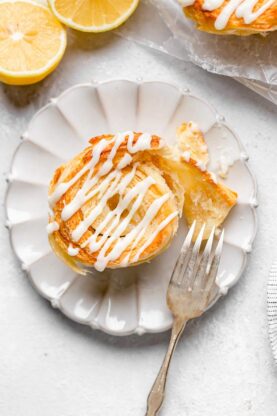 These lemon cinnamon rolls don’t last long in my house but, when there are leftovers, I make it a point to keep them moist and delicious rather than dry and drab. The answer to keeping them moist is all in the packaging method. Store cinnamon rolls in an airtight container or individually wrapped (in saran or foil)  at room temperature for 2-3 days. Move to the refrigerator for up to 7 days.

If you’re not planning on eating your leftovers within a week, I suggest freezing them. Cinnamon rolls can be stored and frozen for up to 4 months. To defrost, allow the rolls to sit at room temperature or a few hours or overnight in the fridge.

To Reheat: a quick zap in the microwave (about 30 seconds) should do the trick! Alternatively, heat in a convection or conventional oven at 350 for about 5-10 minutes.

Is there anything better than waking up to the smell of freshly baked cinnamon rolls? I think not. This week, gift yourself (and your family and friends) with the joy of a cinnamon scented morning!

Check out a few of my fave cinnamon roll recipes: 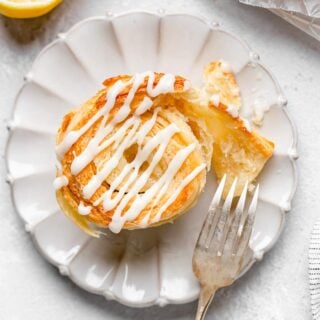 For the Laminated Dough

For the Lemon Sugar Filling

For the Lemon Cream Cheese Icing

For the Laminated Biscuit Dough

For the Lemon Sugar Filling

To Assemble the Biscuits

For the Lemon-Cream Cheese Drizzle

Storage: The biscuits may be stored at room temperature for 2 days. Reheat in the microwave for 15 seconds, or in a 200°F oven for 5 minutes.