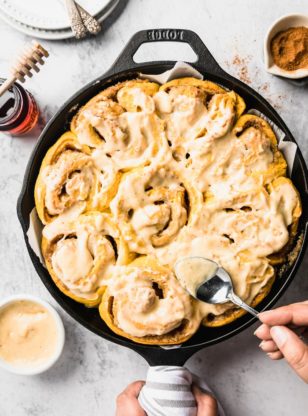 Pumpkin Cinnamon Rolls with Maple Frosting (make that Chai Maple Frosting) have been on my mind for an entire year but, y’all, I’ve been afraid to attempt them! I mean seriously, don’t cinnamon rolls made from scratch just seem scary? I know they did to me!

Honestly, it is anything with yeast. Messing up the rising process is always so intimidating! Because I am taking the plunge, I decided to take a recipe from Baked that I knew would work well. I just made a few adjustments and added a different frosting.

Can I tell you that these Pumpkin Cinnamon Rolls with Chai Maple Frosting are absolutely addictive in every possible way? 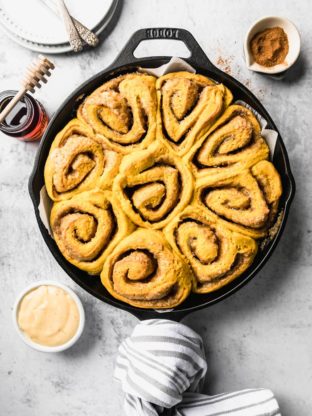 I know, I know, it’s a hefty ingredient list. But, as long as it seems, most of the items can be found right in your pantry! I’d love to take a moment to highlight a few of the more obscure ingredients and offer up a few useful notes. 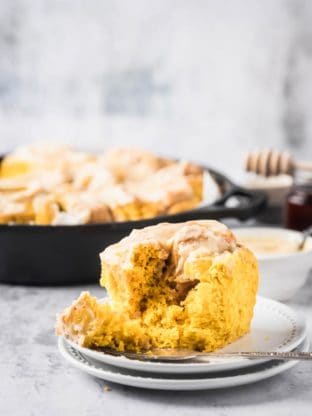 As I said before, cinnamon rolls made from scratch can be intimidating but, today, we’re gonna tackle this recipe head on. No fear. To give you a solid head start, I’ve compiled my top tips for the BEST Pumpkin Cinnamon Rolls EVER!

Be gentle with your yeast. Keep the milk between 110 and 115 degrees. Any cooler and the yeast won’t activate Any hotter and you’ll kill the yeast before it even has a chance. A kitchen thermometer comes in handy here.

Yeast likes a warm environment, so using eggs and butter at room temperature is crucial. Not only will this help to keep the dough at optimum “yeast activity” temperature but the ingredients will also mix together easier.

Fill the Rolls from Edge to Edge

Don’t be stingy! Cover every square inch of the dough with cinnamon-sugar filling. You’ll only need to leave a small section along one edge bare so you’re able to pinch and seal the seam closed once you’ve rolled the dough.

Be sure to roll the dough as tightly as possible. The tighter you’re able to roll, the more buttery layers you’ll get. This will also ensure that the rolls keep their shape during baking.

If your knife isn’t sharp enough, it will squish the rolls and ruin their shape. Instead, loop a piece of dental floss around the dough and cut through the cinnamon rolls.

BONUS TIP: Let the rolls cool before icing! If the rolls are too hot, the icing will run right off of the rolls. Wait for at least 10 minutes before glazing, it’s worth it.

These rolls don’t last long in my house but, when there are leftovers, I make it a point to keep them moist and delicious rather than dry and drab. The answer to keeping them moist is all in the packaging method. Store cinnamon rolls in an airtight container or individually wrapped (in saran or foil) at room temperature for 2-3 days. Move to the refrigerator for up to 7 days.

If you’re not planning on eating your leftovers within a week, I suggest freezing them. Cinnamon rolls can be stored and frozen for up to 4 months. To defrost, allow the rolls to sit at room temperature or a few hours or overnight in the fridge.

To Reheat: a quick zap in the microwave (about 30 seconds) should do the trick! Alternatively, heat in a convection or conventional oven at 350 for about 5-10 minutes.

Catch me baking rolls, sweet or savory, all Autumn long! I mean, is there any better way to wake up on a Fall or Winter morning than to the smell of freshly baked rolls? I don’t think so. 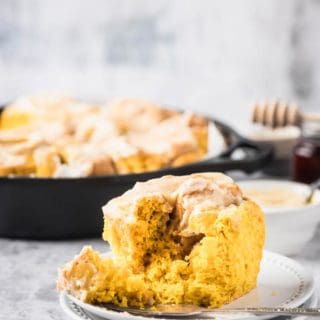 Pumpkin Cinnamon Rolls with Maple Frosting (make that maple chai frosting) have been on my mind for a an entire year but I was afraid to attempt them. I mean seriously, don’t cinnamon rolls from scratch just seem scary? I know they did to me.
5 from 1 vote
Print Pin Rate
Course: Breakfast
Cuisine: American
Prep Time: 15 minutes
Cook Time: 30 minutes
Total Time: 45 minutes
Servings: 12 rolls
Calories: 300kcal
Author: Jocelyn Delk Adams

For the Pumpkin Dough:

For the Cinnamon Filling:

For the Maple Chai Spiced Frosting: