Disclosure: I partnered with Land O’Lakes for this recipe post, but all opinions expressed here are my own. I am grateful for authentic partnerships like this. 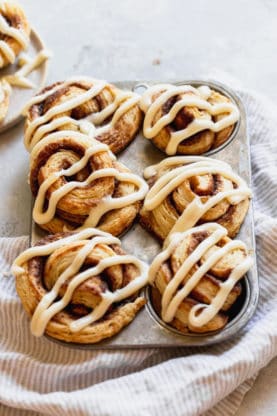 By now, you all know how I feel about the fall; it’s just not my jam. There’s nothing wrong with pumpkin spiced lattes and changing leaves. I’m just a summer baby through and through. I prefer sunshine, sweet tea and strawberry pies. No shame in my game.

But, no matter what side of the autumn debate you land on, cinnamon rolls are undeniably delicious. The perfect fall breakfast? A hot cup of coffee and a warm, oversized, heavily-frosted cinnamon roll. The chewy, gooey bites, sticky fingers and cream cheese icing-coated lips make for the coziest chilly morning munchie.

Of course, y’all know I can’t resist taking a classic and turning it on its head. So, today I’m taking two of my absolute favorite recipes and mashing them up to create something monstrously delectable.

Cinnamon Roll Biscuits are this fall’s go-to breakfast, snack, dessert and just about everything in between! 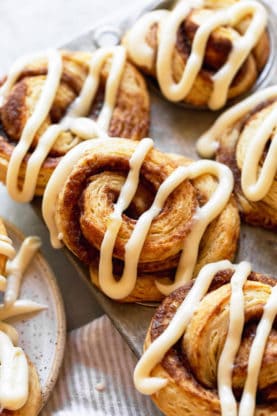 WHAT ARE CINNAMON ROLL BISCUITS?

Cinnamon Roll and Biscuit are probably two references you won’t often hear in the same sentence. Yet, here we are. As we all know, I’m a biscuit fanatic and anything cinnamon-related obsessed; combining the two for this recipe was a cakewalk!

Cinnamon Roll Biscuits are the perfect marriage of buttery, layered biscuits and gooey, spiced filling. Then, the result is topped with a sweet, tangy honey cream cheese icing. I don’t think it gets better than that. Actually, I know it doesn’t get better. 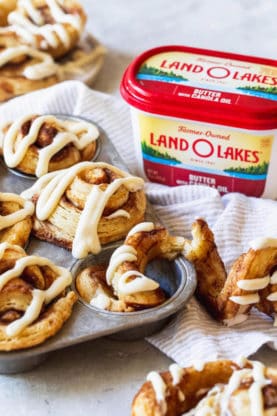 HOW TO MAKE CINNAMON ROLL BISCUITS

Now that we’ve established what these rounds of pure joy are, let’s get into what makes them so darn good! This recipe uses pantry-staple items and clean, simple flavors. The result is flavorful, decadent and a pleasure to enjoy with a cup of joe. 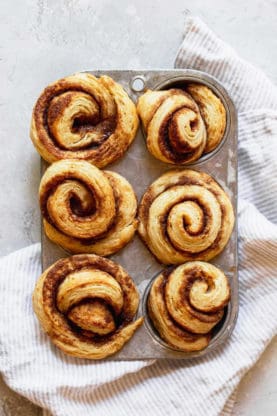 Like traditional cinnamon rolls, these biscuits are best served straight out of the oven. Nothing beats gooey icing on top of hot, doughy rolls. But, if you find yourself with a few extras, I suggest storing them in an airtight container; they will keep at room temperature for 2-3 days.

Alternatively, you can tightly wrap them in plastic wrap or foil and refrigerate for 7 days or freeze for up to 4 months. If freezing, place the wrapped biscuits in a freezer bag and thaw overnight in the fridge before reheating. 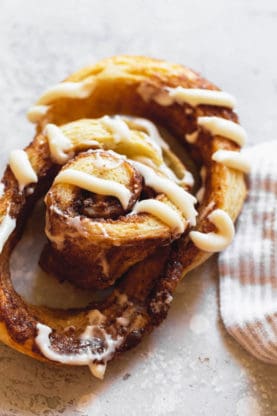 Aside from salt and pepper, cinnamon is the most used spice in my pantry. Seriously, there’s no recipe I can’t sneak a dash or two into.

If you’re a fan of nutty, earthy and warm spice, it’s time for you to up your cinnamon game. Try out a few of Grandbaby Cakes’ BEST cinnamon-filled recipes:

For the Laminated Dough

For the Butter and Cinnamon Sugar Filling

For the Laminated Biscuit Dough

For the Cinnamon Filling

To Assemble the Biscuits

Storage: The biscuits may be stored at room temperature for 2 days. Reheat in the microwave for 15 seconds, or in a 200°F oven for 5 minutes.