Made with five simple ingredients, this silky, smooth, light, buttery and not too sweet Homemade Swiss Meringue Buttercream is the perfect topping for any dessert especially cupcakes!  If you want to try more frostings and icings for your treats, definitely try my Cream Cheese Frosting, American Buttercream recipe , Chocolate Meringue Buttercream and my Real Deal Caramel Icing! 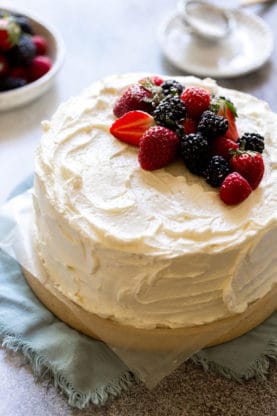 There are two kinds of people in this world: frosting folk and non-frosting folk. Wanna guess which one I am? Team sugary, creamy frosting all the way!

That’s right, I’m the type to eat the frosting before it’s on a cupcake. I love sneaking scoops of buttercream off the backside of a sheet cake with my finger (after I washed my hands of course). There is something about that melt-in-your-mouth mixture and the sugar rush that follows that makes me giddy.

Frosting comes in all colors, flavors and textures but, believe me when I say, I love them all! Each option lends its unique variations to whatever base it is applied to. 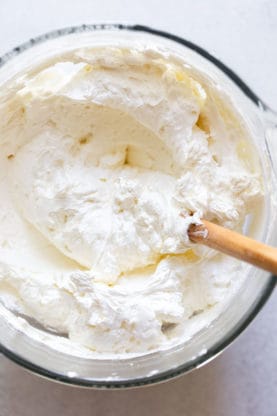 WHAT IS SWISS MERINGUE BUTTERCREAM?

Swiss Meringue Buttercream is a frosting made by combining granulated sugar and egg whites, warming them together over a water bath, then whipping them until stiff. The result is an incredibly airy yet decadent topping used for cakes, cupcakes, macarons and so much more!

Though I love a classic, sugar laden spread, this buttercream is one I love to trot out when I’m looking to elevate a dessert!

Buttercream, in its simplest form, is a mixture of butter and sugar that has been creamed together to make a fluffy frosting. There are a variety of styles of buttercream that vary in difficulty to make, sweetness and texture.

American Buttercream, also known as simple buttercream, is the easiest to make and work with. The texture is quite thick and the flavor, very sweet.

Swiss Meringue Buttercream is a bit more difficult to make because it requires a double boiler. The texture is silky smooth and the flavor is buttery and much less sweet. 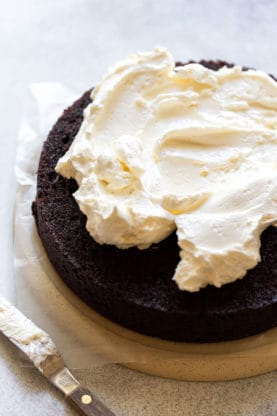 HOW TO MAKE SWISS MERINGUE BUTTERCREAM

There is slightly more to making Swiss Meringue Buttercream than just creaming butter and powdered sugar. But, you’ll find that the extra effort is well-worth it.

With that being said, there are a couple downfalls that you should look out for. I’ve made all the mistakes so you don’t have to!

During the double-boiling process, it’s crucial that the sugar completely melts and combines with the egg whites. To achieve that, cook the mixture for around 10 minutes, whisking occasionally.

The mixture will go from thick and transparent, to thinner and more opaque. Dip a finger into the mixture and rub it together with your thumb. If you feel any grit, keep cooking. 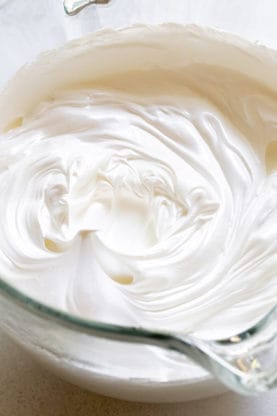 While whipping, the buttercream will go through a phase where it looks curdled but that’s completely normal. This usually occurs right before the buttercream comes together and begins to thicken.

Be sure to add in the butter one tablespoon at a time, allowing each one to fully incorporate before adding the next one.

Controlled temperature is the key to avoiding a runny texture. The butter needs to be softened but still slightly cool to the touch. The whites and sugar need to be hot enough to dissolve but then, properly cooled before adding the butter.

It’s important to be patient. But, if you find that you’ve still wound up with a runny result, don’t fret! Stick the bowl in the fridge (covered of course) for about 20 minutes and then re-whip it. It’ll work like a charm, I promise!

CAN IT BE FLAVORED?

Absolutely! Swiss Meringue Buttercream is super versatile! Not only can it be colored (using gel paste food coloring) but it can also be flavored using a variety of ingredients.

Here are a few ideas:

TIP: Just be sure not to add too much liquid or the buttercream will separate. It’s best to add in the liquid slowly while whipping. Watch carefully!

WHAT CAN I SPREAD IT ON?

Swiss Meringue Buttercream is light and silky yet, rich and buttery at the same time. With each bite there is a subtle sweetness that gives way to a melt-in-your-mouth experience.

I love spreading this buttercream on a decadent chocolate cake to add in an element of airiness. Whether it’s a Red Velvet or Devil’s Food Cake, the result is bound to be delicious!

This recipe can also be spread on Baked Alaskas, piled high on Lemon Pies or Pavlovas. Don’t forget to quality test the buttercream by eating a few spoonfuls straight out the bowl first!

CAN IT BE MADE IN ADVANCE?

Personally, I prefer to make my buttercream fresh but, there have been many occasions where I’ve had to make it ahead of time.

Swiss Meringue Buttercream can be made, stored in an air-tight container and kept in the refrigerator for up to a week. If you find that the buttercream has lost some of its airiness and hardened a bit, don’t worry. Simply scoop it out of the container, allow it to come to room temperature, re-whip it and watch it come back to life!

Got cake on the brain? Stumped on what to spread? Try out some of Grandbaby Cakes’ BEST cake recipes along with their sugary sweet counterparts. Get funky, mix n’ match and create something all your own! 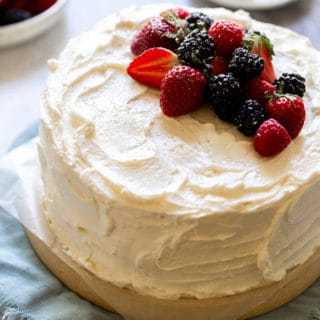 During the double-boiling process, it's crucial that the sugar completely melts and combines with the egg whites.  To test, dip a finger into the mixture and rub it together with your thumb. If you feel any grit, keep cooking.