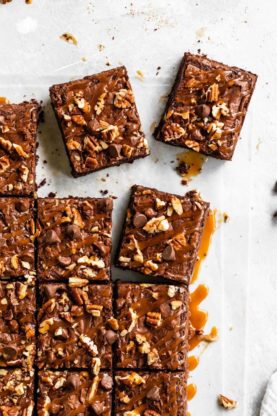 Am I the only one who feels like we are free falling through Summer? As the weeks whiz by I find myself mentally preparing for changing leaves and cooler weather but, y’all, I’m just not ready for it. So, to ease the transition, I’m stocking up new cookbooks to last me through the long, dark days. If you’re looking for me in the next few months, I’ll be in the kitchen.

This year, I’m craving all things decadent: cheesecake, bread pudding, molten lava cake and, best of all, brownies! When it comes to brownies, I’ve never been a fan of the outlandish and unusual. I have almost always preferred a simple, no-frills fudge brownie to its double chocolate-chunk or nut-filled competitors. But, every now and then, I come across something that rocks my socks, today’s Turtle Brownies do exactly that! 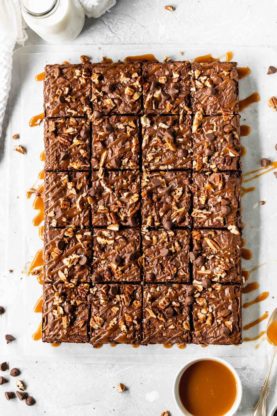 One Tin Bakes is a dazzler of a baking book written by none other than my dear friend Edd Kimber. In 2010, Edd was the winner of the first ever season of the Great British Baking Show! Since then, he’s gone on to develop and publish four cookbooks: Say It With Cake, The Boy Who Bakes, Patisserie Made Simple and, his latest, One Tin Bakes.

Edd and I connected and become friends on my trip with Bailey’s Irish Cream to Ireland last year.  He is just so fun and such a wonderful person.  Not only because of his recipes but because of his character and commitment to creativity. One Tin Bakes is a peek inside the mind of a brilliant baker who combines butter and sugar with solid technique. Did I mention how fun each recipe is to make? Walk, don’t run to pick up a copy of this terrifically clever book! 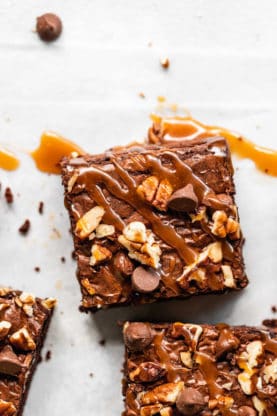 HOW TO MAKE TURTLE BROWNIES

Whenever I come across a new, unique variation of a classic recipe I get super excited. I love the idea of reviving something a bit outdated or overdone. We’ve all had a Turtle Brownie, been there done that, but you haven’t had this Turtle Brownie. Made with fresh and intriguing ingredients, this recipe takes on an American classic in a deliciously fun way.

Here are my two-cents on today’s ingredients: 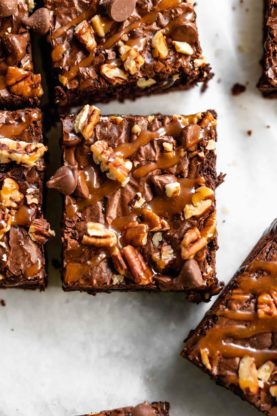 TIP: I am obsessed with eating these brownies warm with a scoop of vanilla ice cream. Place the brownie in a microwave-safe bowl and zap it for 10-15 seconds. Top with ice cream of choice and enjoy!

During the Winter months, I’m all about warm, fudgy, freshly baked brownies. There’s just something about ooey-gooey chocolate that cures the gloomy weather blues. Wrap yourself in a chewy chocolate blanket and hibernate a bit, you deserve it.

Check out Grandbaby Cakes’ most decadent brownies EVER: 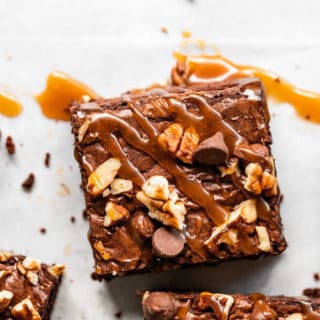 For the Chocolate Brownies

For the Salted Caramel

For the Salted Caramel

Storage: Store in a sealed container for four days. Flour: You can substitute the rye for plain all purpose flour, but if you haven't tried rye, I would implore you to, it makes a very special brownie.