These decadent Sticky Buns start with a fluffy dough that is filled with cinnamon sugar pecans then drizzled with both with a sticky bourbon pecan glaze and rich cream cheese icing!  If you love these, you will also love these Orange Cinnamon Rolls, Lemon Cinnamon Roll Biscuits, Classic Cinnamon Rolls and Pumpkin Cinnamon Rolls.

Thank you Charneice McKenzie from GloBelle Kitchen for guest posting this recipe! 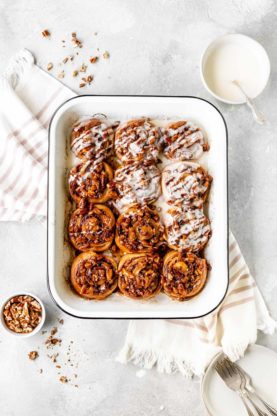 Pumpkin spice might be Fall’s most popular flavor combo, but where I come from, nothing says Fall more than bourbon and pecans. Kentucky produces over 90 percent of the world’s bourbon supply. That’s why we cook with bourbon. We smoke our meats with it. We simmer it with our chili. It’s in our pies. It goes in our apple ciders. That’s why bourbon, paired with pecans, is my favorite combo for sticky buns.

I prefer a hearty, savory breakfast over sweets first thing in the morning. These sticky buns are the perfect, cozy accompaniment to a hot drink while curled up on the front porch with a good book and fuzzy socks watching the trees change colors. 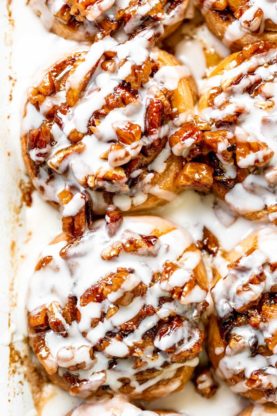 Cinnamon rolls or sticky buns from scratch are definitely a time-consuming labor of love, requiring at least 3 hours on the fast end. But oh, are these sweet treats worth every minute! The soft, flakey layers just can’t be replicated by instant rolls from the can. I really hope these rolls become part of your fall baking menu. 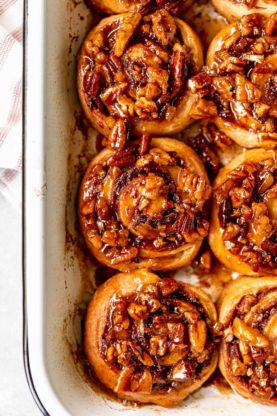 How to Make Sticky Buns

Here are my best tips for making the best pecan sticky buns: 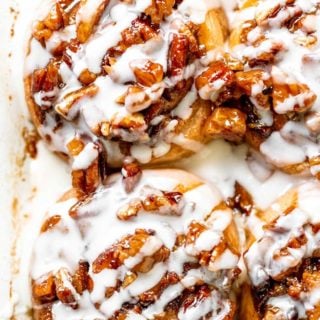 For the Bourbon Pecan Glaze

For the Cream Cheese Icing

It's better to underbake than overbake. Remember, your pastries will continue to bake a bit after being removed from the oven. To avoid over baking and thus, drying out the pastry, begin checking the oven every five minutes starting at the 30-minute mark.