Disclosure: I am excited to announce I work with Coca-Cola however all opinions expressed here are my own. 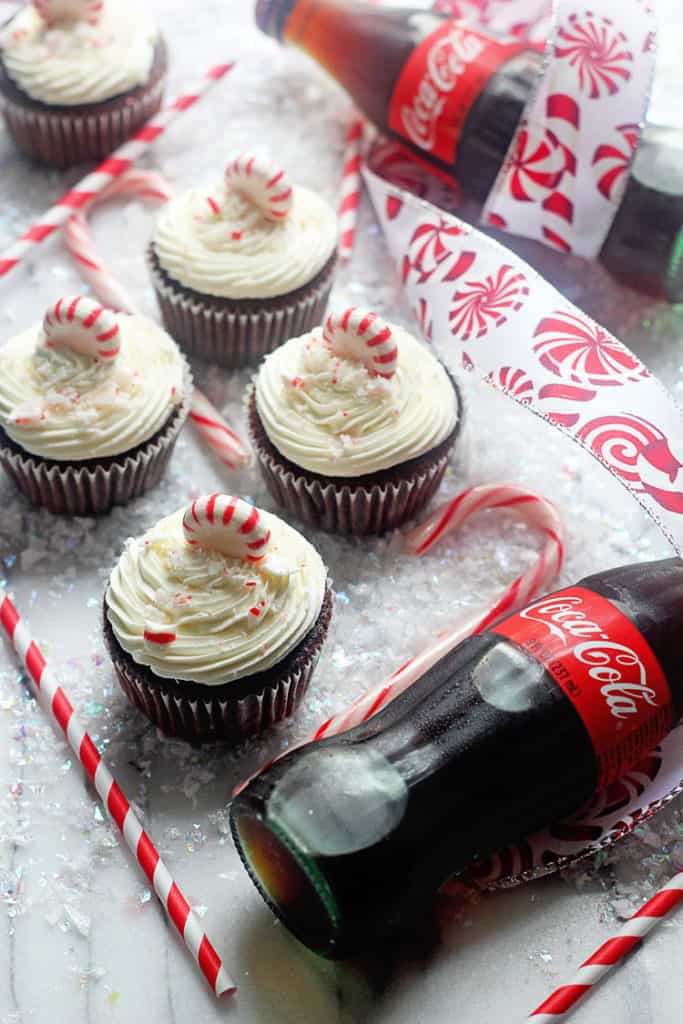 Christmas is in full swing everybody! The lights are strung, mistletoes are dangling above doorways and Santa’s sleigh is polished and ready to fly (or so I’ve heard). I absolutely love the Holiday season! There’s nothing like nights spent with family sipping hot chocolate and binging our favorite Christmas movies.

For me, part of the joy of Christmastime is the baking. Whether it’s pies, cookies or cakes, I can’t get enough of it. Oddly enough, it’s pretty rare to come across unique Christmas cupcake recipes. So I’ve decided to change that this year. Coca-Cola Chocolate Cupcakes with Peppermint Buttercream are my latest holiday obsession and they’ll be yours too!  This is a slight twist on my perfect Chocolate Cupcakes. 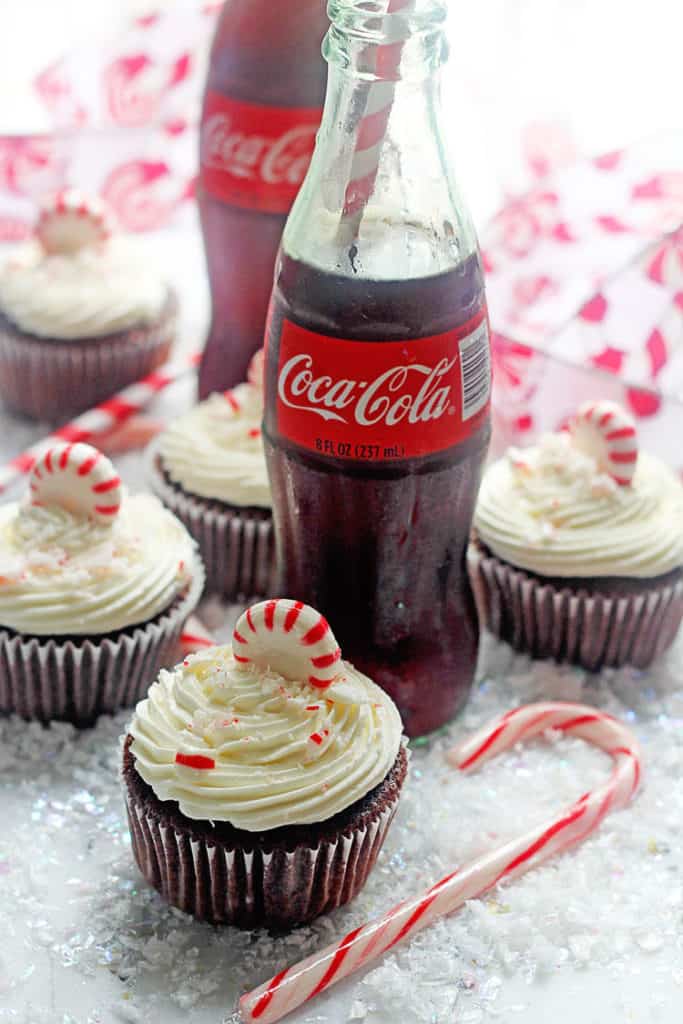 I know, the idea of using Coca-Cola in baking sounds a bit left field. But let me tell you, I LOVE using cola in my recipes. If you take the time to identify the flavors in a bottle or a can of cola you’ll notice the traces of vanilla, cinnamon and citrus oils.

By using cola in these cupcakes you’re infusing those same flavors in your cake while also adding moisture. The sugar in the cola also deepens the flavor of the chocolate so that each bite is richer than the next.
These cupcakes will go down in history as the most incredible chocolate cupcakes ever. And if you haven’t tried my Coca-Cola Cake, you are missing something truly special.

At this point, you might be asking yourself where the Christmas in these Christmas cupcakes is. Two words: Peppermint Buttercream. Peppermint is the quintessential flavor of Christmas. Candy canes, peppermint bark and peppermint hot chocolates are just a few of the things that make up the holiday season.

Chocolate and Peppermint go together like peanut butter and jelly. Each bite of the buttercream balances out the density of the chocolate perfectly. I can guarantee you that this treat will become a Christmas favorite for years to come. It certainly has become mine.

The key ingredient for this buttercream is of course butter.  It must be room temperature to whip up perfectly.  I also add a hint of heavy cream because it makes the consistency almost like whipped cream, which I love.  I talk more about amazing frostings in my Perfect American Buttercream recipe. 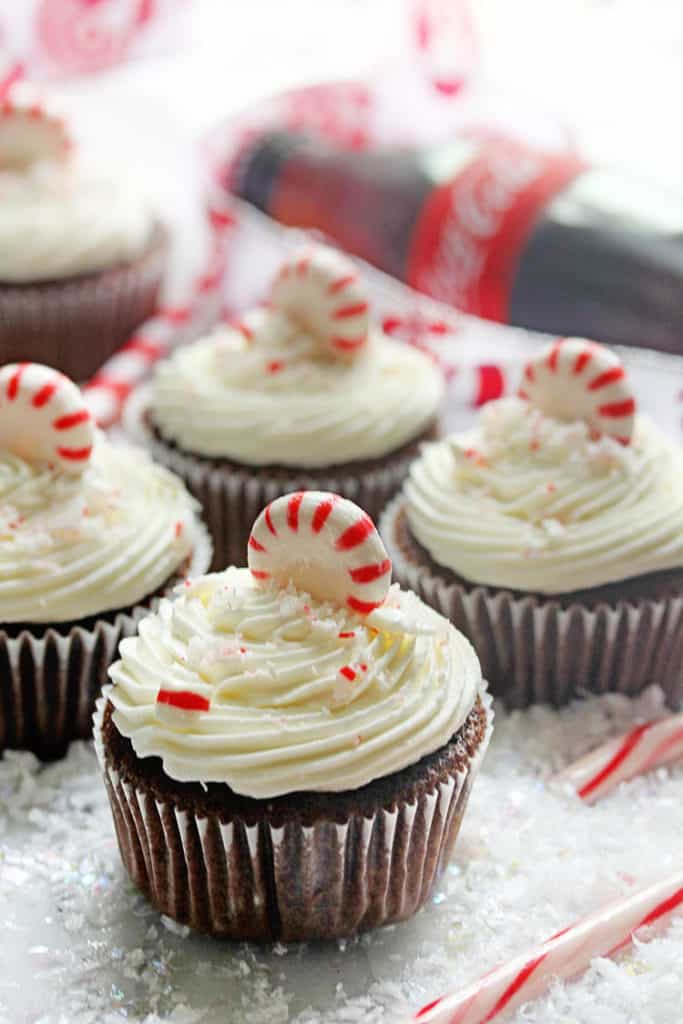 How To Make Perfect Coca-Cola Cupcakes

This recipe is intended to be very straightforward and simple enough for anyone to make. But I’ve had my fair share of dry, sugary cupcakes that could have been so easily prevented. Here are a few tips to help you get the best result possible!

Use a Scoop to Fill Cupcake Liners

I’ll be the first one to admit that when I’m feeling a bit lazy I eyeball it. But, there’s nothing worse than pulling your cupcakes out of the oven to find that they’re all cooked unevenly. The best way to avoid this is to put the same amount of batter in each liner.

Use a large scoop for standard sized cupcakes and a small cookie scoop for minis. Fill each liner about ⅔ of the way.

Baking is super exciting and I find myself constantly wanting to open up the oven and take a sneak peak. But opening up the oven during baking can cause the fragile air bubbles in the cake to pop and that means a dense cake. This is a moment to exercise a little bit of patience this holiday season.

Don’t Be Stingy with the Frosting

Frosting acts as a seal to help the cupcake retain its moisture and prevent it from drying out too quickly. Be sure to cover the entire cupcake top as best you can. This step is essential if you plan on making these for an event where they will be sitting out for a long period of time.

Use this opportunity to get creative with piping tips, ganaches or fun toppings that will make your cupcakes stand out

I could only think of one thing that would make these cupcakes better (if that was even possible), and that was a creamy and smooth peppermint buttercream. Peppermint is the quintessential flavor for Christmas. I can guarantee you that this treat will become a Christmas favorite for years to come. It certainly has become mine.

If you Love These Coke Cupcakes, You Will Love These:

If you like this dessert recipe, you’ll some of my other great peppermint and Coca-cola flavored recipes. 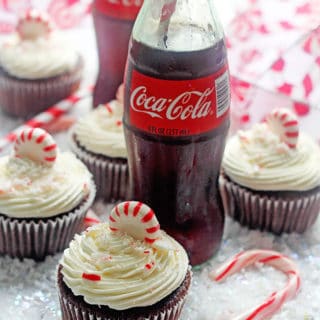 Feel free to replace peppermint in this recipe and make year round.  You can use vanilla or any other flavors to switch up the buttercream.