If you are searching for the Best Bread Pudding, look no further! The Best bread pudding recipe has soaked bread in a rich creamy warm spiced custard filled with brandy and dried cranberries that’s baked then topped with a warm indulgent cream sauce. Make it for Christmas, Thanksgiving, Mardi Gras, or any other holiday occasion you can think of! If you enjoy this bread pudding, you need to try my Bananas Foster Bread Pudding, Peach Cobbler Bread Pudding, or Sticky Toffee Gingerbread Bread Pudding.

I don’t know about y’all, but I could eat bread pudding every single day of the year! It’s the best dish to make for breakfast or brunch, a decadent dessert, or a delicious addition to any holiday feast.

It can be prepared in any number of ways, but everyone will fall head-over-heels for this one. It’s sweet, moist, lightly spiced, and downright addicting!

So if you have any stale bread kicking around, you know what this means. You now have the star ingredient to make the Best Bread Pudding Recipe!

What Is Bread Pudding?

Bread pudding is a world-renowned dish that is served in pretty much every country around the globe. Most recipes involve stale bread baked in a custard made of eggs, milk, and cream.

I decided to make this recipe more festive by including brandy, dried cranberries, cinnamon, and nutmeg. Once the bread has soaked up all the flavors, it’s packed into a baking dish and cooked to perfection.

The secret to making the best bread pudding is in the sauce. While caramel is a very popular option, there’s nothing quite like my rich cream sauce.

Serve this recipe for breakfast, dessert, or an indulgent snack when hunger strikes!

What Is The History?

Bread pudding originated in Europe as early as the 11th century, but it wasn’t always so decadent! In fact, it was initially known as a “poor man’s pudding” since it was made with a simple mix of stale bread, water, spices, and some sugar.

When settlers brought their recipes to the Americas, bread pudding exploded in popularity, especially in states like Louisiana. Nowadays, this dish is one of the most decadent, rich, and creamy dessert staples of southern cuisine.

How to Make The Best Bread Pudding

I could go on and on about all of the ways to make this recipe super unique. I mean, just using different types of bread like challah or banana bread creates an entirely different recipe!

You can swap out cranberries with other dried fruits like raisins, currants, cherries, or apricots. Nuts are also a popular addition to bread pudding. Try pecans, walnuts, or hazelnuts for a crunchy texture.

Choose the highest quality bread you can find for the best results. My go-to is usually French bread, but Italian bread works well too. Good quality bread holds up better and doesn’t turn out as soggy — No one likes soggy bread!

As for the sauce, it’s important to go slow. If you heat it too quickly, you run the risk of it breaking or curdling. If it does, try blending the sauce to save it.

What To Do With Leftovers

You’ll be happy to know this stores well in the refrigerator! Once it’s completely cooled, transfer it to an airtight container and it will last for 4-5 days. Make sure to store the sauce separately so the bread doesn’t turn to mush.

If you don’t finish this recipe within the week, it can be frozen for up to 3 months. Again, don’t freeze it if it’s covered in sauce. Otherwise, store the leftovers in a freezer-safe bag or container.

You can definitely eat bread pudding cold, but it’s just so much better when it’s warmed up again! For the best flavor and texture, heat it in the oven for about 10-12 minutes at 350 degrees F.

To keep it moist, bake it covered with aluminum foil. For a crispier version, heat it uncovered for 1-2 minutes towards the end of baking.

If you’re in a hurry, you can always reheat a slice in the microwave for 30 seconds at a time, or until it’s heated through.

Make It Ahead of Time

There are two options when it comes to prepping this recipe ahead of time. The first is assembling the entire dish and keeping it in the fridge overnight, or until you’re ready to bake it. The second is cooking the entire dish, then quickly reheating it when it’s time to serve.

Of course, serving freshly made bread pudding is always my top choice, but do whatever is most convenient for you.

One quick note to remember is the longer you soak the bread, the softer it will be. It’s all personal preference, but just keep that in mind when you’re preparing this recipe.

For more dessert-style breakfasts, try some of my TASTY French toast recipes:

Does it need to be refrigerated?

Yes, bread pudding needs to be refrigerated. Since this recipe contains dairy, eggs, and sugar, it could trigger microbial growth. Don’t leave it out for more than two hours.

Why is my pudding mushy?

The most common reason for mushy bread pudding is that your bread isn’t stale enough. While the texture isn’t necessarily ideal, it should still taste good.

Should it be covered while baking?

It isn’t necessary to cover bread pudding while baking it. However, if you notice the top is starting to burn before it’s cooked all the way through, cover it with tin foil to slow the burning process. Some sources claim it is best to bake bread pudding in a water bath to help prevent it from burning or drying out, but I don’t find it necessary for this recipe. 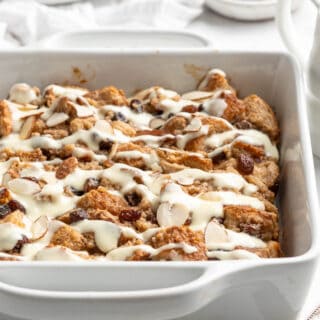 For the Bread Pudding

For the Easy Cream Sauce

For the Bread Pudding

For the Cream Sauce

If your bread isn’t stale, spread the cubes out on a baking sheet. Bake until the bread appears golden and hard, which will prevent a mushy end result.