These perfect Southern Hush Puppies taste like little morsels of fried cornbread. Tender and fried until golden brown, they are perfect served along with your fish fry all year round!  Definitely serve these with my Fried Catfish and Fried Shrimp recipes!

If there’s one thing that has stood true through my childhood and into my adulthood, it’s this: I love a good ole’ fish fry. I grew up spending Summer’s in Mississippi where we held an annual family reunion. I can still recall feeling the Summer heat while I watched the grown-ups fry up catfish to the tune of classic soul music. Joyous family and food-filled moments like those are the ones I remember the most about my childhood. Such a blast!

We’d always return from our Southern excursion with a massive box of fresh catfish from down in the Delta. In the weeks that followed we’d continue to enjoy a weekly fish fry. While many are familiar with Fish Fry Friday, my family did our on Wednesdays. Though it might seem strange, Wednesdays were the only day of the week that my dad had off from work. He dedicated his time off to cooking up our favorite fried fare and more importantly, spending time with us.

Dad’s hot, fresh catfish fillets are legendary! Not only was the fish delicious but it was always served with Hush Puppies! The combination of flaky, seasoned fish and morsels of fried cornbread was absolutely astounding. I do my best to keep the tradition alive by hosting regular fish frys of my own and trust me, I never forget to include the Hush Puppies! 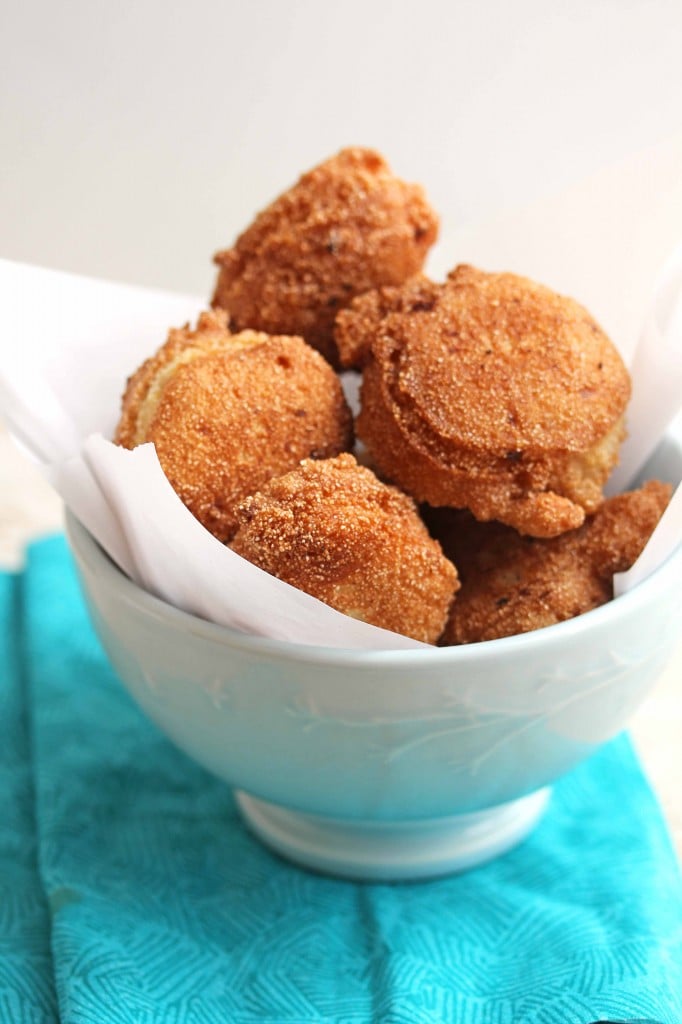 WHAT ARE HUSH PUPPIES?

Hush Puppies are to fried fish what peanut butter is to jelly. Seriously. A Hushpuppy is a small, savory, deep-fried round made from a cornmeal-based batter. There are variations of the recipe that can include scallions, garlic, whole kernel corn or peppers.

The texture of a Hushpuppy is crisp with a moist, tender middle. I would compare the flavor to that of buttery, salty cornbread. It’s almost too good to be true!

WHY ARE THEY CALLED HUSH PUPPIES?

The first recorded use of the word “hushpuppy” dates back to 1899! Back then, hunters and fishermen would fry up a simple corn mixture and feed it to their dogs. The mixture was often leftover from having bread-coated or battered their own food. These easy, cheap treats were known to “hush the puppies”. 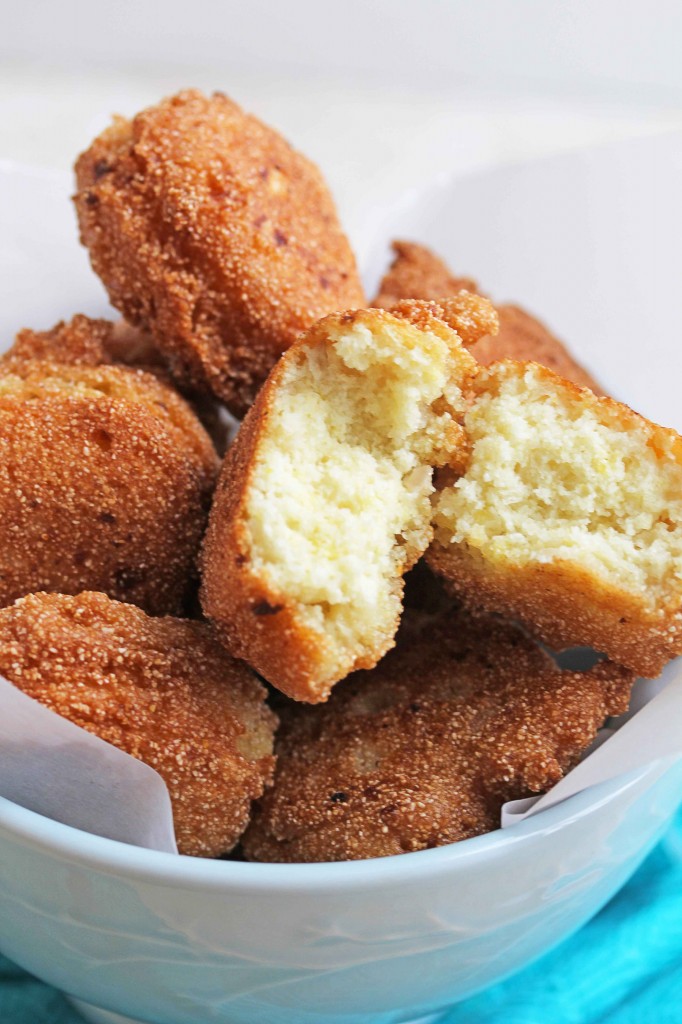 HOW TO MAKE HUSH PUPPIES

Wanna know how to whip up a batch of hush puppies like a pro? Well, I’ve got the insider tips that make for the most flavorful, well-cooked puppies around!

These are my top 3 secrets for a great hushpuppy batter:

Warning: Freshly cooked Hush Puppies are delightful but, they can be dangerously hot when they come out of the fryer. To avoid injury, please wait at least 5 minutes before popping one in your mouth. 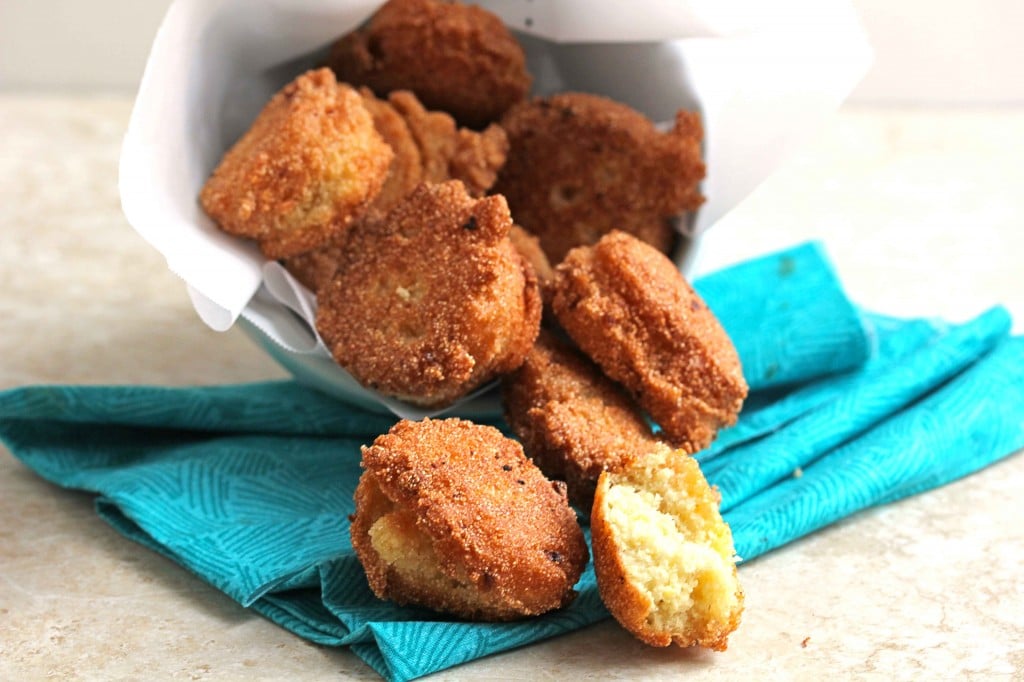 WHAT DO I SERVE WITH HUSH PUPPIES?

Most, if not all, plates at a Southern fish fry (or even barbecue joints) come with hushpuppies. These two-bite, piping hot pieces of fried cornbread are beloved in the South. Though they can be enjoyed as a snack or served with just about anything, I would encourage you to first enjoy them with some classic Southern fare.

Whatever you choose to serve these bad boys with, it’s guaranteed to be a huge hit!

Good ole fashioned hush puppies are to fried fish what peanut butter is to jelly. This is the perfect hush puppy recipe too because they taste like little morsels of fried cornbread. Sounds utterly delicious right? I whip up the batter for these in about 5 minutes flat, fry them up golden brown and serve them along side some fried catfish, tilapia, perch, flounder, whiting, shrimp or whatever else we may have in the house.
5 from 2 votes
Print Pin Rate
Course: Side Dish
Cuisine: Southern
Prep Time: 10 minutes
Cook Time: 10 minutes
Total Time: 20 minutes
Servings: 12 hush puppies
Calories: 64kcal
Author: Jocelyn Delk Adams