After a delightful supper with soul food staples like collard greens, smothered pork chops and macaroni and cheese, I can think of very few other classic, southern desserts to complete your supper than this homemade banana pudding recipe. 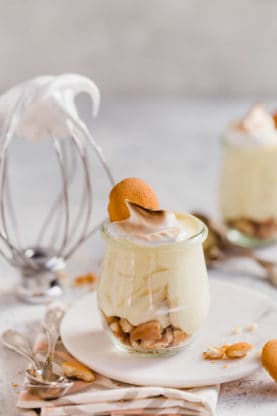 This wonderful recipe comes from my dear friend Carla Hall and her cookbook Carla Hall’s Soul Food.  It is such a fantastic book with so much heart and well “soul” that you must add to your collection.  I felt so genuinely connected to all of the recipes in the book but this one stood out to me. 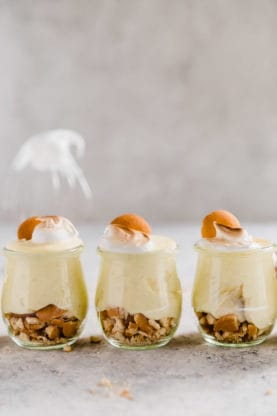 WHERE DID BANANA PUDDING COME FROM?

After bananas became more available from the Caribbean and South America after the American Civil War, homemade banana pudding recipes flooded the U.S. in the 1890s. It started to pop up in hundreds of newspapers, magazines, and cookbooks all over the country. Somewhere along the way banana pudding became nearly synonymous with the South. That seems to have happened just after World War II. Over the course of about 50 years, hundreds upon hundreds of banana pudding recipes were published in newspapers all over the country, but they were most prominent in Southern based publications. 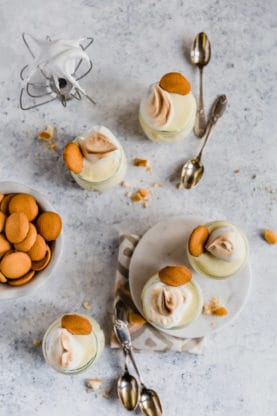 HOW TO MAKE HOMEMADE BANANA PUDDING

Each ingredient in this pudding is vital; they each add their own flavor, texture and flare. 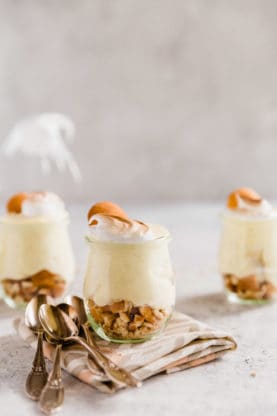 This recipe requires a ton of whisking. You whisk your cornstarch, sugar and egg yolks together, then you heat your milk, half and half and mashed bananas in a medium sized sauce pan over medium heat. While whisking your egg yolk mixture, add your heated milk mixture to it a little at a time. Your prep time for all this whisking to create your pudding is roughly 10 to 15 minutes. Once your pudding is finished, put the bowl it is in in the refrigerator to cool and top it with plastic wrap. 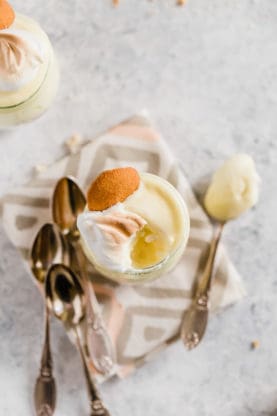 HOW DO YOU THICKEN BANANA PUDDING?

The key to thick pudding is the cornstarch. You must boil your pudding mixture so the liquid can be absorbed by the starch.

THE BEST WAFERS TO USE

Traditionally, recipes will call for Nilla Wafers and believe me, they’re dang good. The way they get soft, but never soggy, from the pudding is just crazy good. But lately, I love the idea of upgrading the traditional recipe by using a higher quality vanilla shortbread cookie. The product is a bit more buttery with a standout vanilla flavor. You’re welcome to make your shortbread homemade, but you can also easily find higher quality shortbread options at your local grocery store or bakery. You can’t go wrong either way.

HOW TO KEEP THE BANANAS FROM TURNING BROWN

You can spray a small amount of citrus juice on the bananas before adding it to the completed dish. This keeps the bananas from turning brown.

The Best Banana Pudding Recipe is unassuming, innocent, old fashioned and completely perfect. Each bite should remind you of a version of the same Banana Pudding you grew up eating. Banana Pudding, or Nanner Puddin as its also called, is one of the easiest desserts to make so long as you can make a homemade custard. Simple, yet oh so delicious. This pudding recipe is about as much of a comfort food in the South as it is a dessert. One that everyone always looks forward to digging into to get the perfect ratio of vanilla wafers, pudding, and bananas. 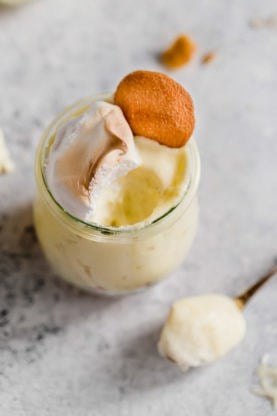 I love how the banana flavor permeates throughout the whole dessert. Even if you were to pick out all the banana slices before eating, it still tastes of bananas. By incorporating both sliced and mashed bananas in this recipe we ensure that every spoonful is packed with that sweet, fruity flavor. Using meringue rather than whipped cream takes this pudding to a new level. The meringue is light, fluffy and slightly sweet; it perfectly balances out the heaviness of the pudding. The added layer of sophistication doesn’t hurt either.

HOW TO STORE BANANA PUDDING

Refrigerated banana pudding can last up to a week. If you want to keep it a little longer, you can freeze it. Before serving the dish, take a portion out right after completing it. Scoop it into a freezer-safe and airtight container and place in the freezer. 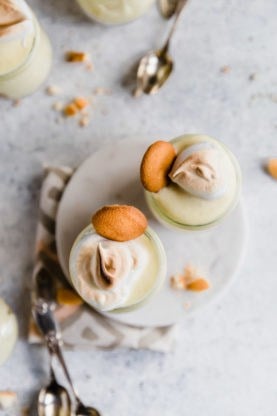 Together, each component of this recipe creates a more elevated version of this classic dessert. That’s not to say that it’s any better but occasionally a slight variation is just what we need. A little change never hurt anybody. The best part of this pudding is its simplicity; you can assemble it quickly without compromising on flavor or quality. Regardless of where you bring it, who you serve it to or what you serve it in, it’s guaranteed to be a crowd pleaser anywhere you serve it. 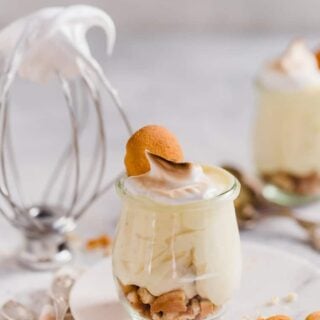 For the Banana Pudding

This recipe is just fantastic with shortbreads but you can also go with an original classic using nilla cookies.  That will give you an old fashioned taste.