This tender, moist and perfectly sweet Honey Glazed Ham recipe is cooked in its own juices and glazed with a mixture of honey, pineapple juice and brown sugar. This honey baked ham is sweet and salty, buttery and sticky, and the star of any holiday table!!  PLUS I HAVE SLOW COOKER INSTRUCTIONS TOO! Serve for the holidays with Deviled Eggs, Cornbread Dressing and Rolls!

I love Easter! Well, I love any holiday that calls for copious amounts of delicious food and almost too-many family members buzzing around to enjoy it.

Since I was a little girl, Easter Sunday was always special. My mother made it a point to buy me new clothes (Sunday best of course) and comb my hair a bit harder than usual.

After church service, I enjoyed the usual egg hunts and outdoor play until lunch was ready. The location of our meal rotated each year but the contents of the table stayed the same. There were Big Mama’s dinner rolls, candied sweet potatoes, collard greens, and best of all, Glazed Honey Ham.

This honey baked ham recipe makes a main course that will get rave reviews for holidays and special occasions. In addition to Easter, it’s perfect for Christmas and Thanksgiving too!

Today’s easy honey glazed ham recipe with brown sugar is an ode to the memories of my childhood. It’s sweet yet salty, always tender and sticky on the fingers. You might not be ready for this y’all!

What is Honey Baked Glazed Ham?

Each year, in the early Spring, Easter tables are set with pastel napkins and bunny-shaped shakers. Since the 1940’s, hams have served as the star of Easter meals in the U.S.

In the two weeks leading up to Easter, Americans buy an average of 8.5 million pounds of whole ham. Ham seems to go along with Easter festivities as much as baskets and egg hunts.

Brown sugar honey glazed ham is traditionally coated in a crispy, spiced sugar glaze then, slowly baked to perfection. The result is a tender, moist and sweet-salty ham served whole. After being sliced and served, this ham never lasts long!

With few ingredients and a lot of patience, you can create a delicious centerpiece for this year’s Easter lunch.

Let’s break down what you’ll need:

WARNING: Pork is inherently a very salt-forward protein. Some store-bought hams will have also already been brined in salt water. As with any other recipe, salt and pepper your ham as needed. Use a light hand and be very careful!

How To Make Honey Glazed Ham

Anytime a recipe calls for a large, whole cut of meat, there is an assumption that it will be difficult to make.  This ham does not fit that description. There are three crucial components to this recipe: a fresh ham, a well-balanced glaze and an oven timer.

Making the best honey baked ham starts with the ham glaze recipe. It’s easy to make and can actually be made ahead of time if you want.

Once you’ve got the glaze prepared, grab your baking pan, preheat the oven, and get the the ham ready to cook.

As if this recipe couldn’t get any easier, this baked ham recipe is a slow-cooker friendly.

Early Easter afternoon is a busy time; we’re all bustling around the kitchen with the oven cranked high and the apron tied tight. So, why not free up a little space in the oven and make use of your slow cooker?

The low, slow heat of the slow cooker gently braises the ham which makes for the best melt-in-the-mouth pork you’ve ever had.

TOP TIP: Use the Right Ham! You don’t wanna use a boneless ham in a slow-cooker. Instead, buy a spiral-cut ham that is fully cooked and has the bone in. Butt-end hams fit into slow-cooker a bit more easily. A 10-pound ham is as big as you can fit into a 6-quart slow-cooker.  Make sure you spray it completely with non stick spray.

Leftover ham is rare because man, does it go quickly. But, if you find yourself with a few extra slices, it’s important to store it properly. Store the ham (in its juices) in an airtight container in the refrigerator for up to 5 days.

BONUS TIP: This ham makes for the best next-day ham sandwiches. Make sure you’ve got good bread and some extra mustard on hand. Dipping the sandwiches in the juices takes it to a new level.

What to Serve with Ham

Since this is a holiday recipe, I would suggest serving this ham alongside your favorite sides. From mashed potatoes to cornbread dressing, ham goes with just about anything.

If you need a few ideas, here are a few of Grandbaby Cakes’ BEST side dishes:

Do you put glaze on ham before cooking?

Yes, definitely. In this recipe, the glaze is added three different times which creates a perfect layer of brown sugar glaze over the top of the baked ham.

How much ham per person?

When cooking a bone-in ham, allow about a half pound per person. This takes into consideration the weight of the bone. If you want to have leftovers select a larger ham. Just be sure your ham will fit into your pan or slow cooker depending on the preparation method you plan to use.

My preference is a spiral cut, bone-in, precooked ham. The bone adds flavor and helps retain moisture in the ham while the spiral cut makes serving easier and also allows the glaze to penetrate the ham. You can also use a boneless ham but it’s not the best!

*Did you make this recipe? Please give it a star rating and leave comments below!* Post a photo of how your version of the recipe came out on Instagram (using #grandbabycakes)!! 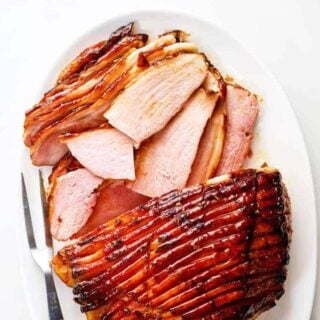 Slow Cooker Tips: Butt-end hams fit into slow-cooker a bit more easily. Above all, take into consideration the size of your slow-cooker. A 10-pound ham is as big as you can fit in Make ahead: The glaze can be made up to 3 days in advance and stored in the refrigerator. Choose a spiral cut ham for the best pineapple honey glazed ham. Score the ham before adding the glaze so the flavors penetrate more of the meat.