Southern Red Eye Gravy serves one purpose: it makes use of every last bit of the salty, sticky, sweet, and meaty glaze left behind by fried country ham. In the South, fried country ham is often served as a quick breakfast, so it isn’t a surprise that at some point someone figured out how to make use of the drippings.

What is Red Eye Gravy?

Also known as red ham gravy, poor man’s gravy, bird-eye gravy, or bottom sop, Red Eye Gravy is a simple Southern favorite made with country ham drippings and strong black coffee. It is by no means a thickened gravy- think more along the lines of an au jus. The smoky, robust gravy is poured over the ham it was made with and served with warm biscuits or creamy grits.

Red eye gravy is super popular in the south but little is known about the actual origin of the recipe. The curious name “red-eye gravy” can easily be explained. As the coffee is added to the pan, the ham drippings form numerous small droplets which, some say, resemble little red eyes. This occurs because the fat cannot properly emulsify into the liquid, so it sits on top instead.

Country ham is a ham that has been dry-cured with salt and preservatives over a long period of time. You can find shelf-stable country ham at just about any grocery store.

A good-quality, well-cured country ham such as a Smithfield or a genuine Virginia ham is ideal. Choose the slice of uncooked ham that has the most fat so you can maximize its delicious drippings. I chose to use country ham slices because that was the best option at my local market. I also find that the slices render more fat and make for easier serving.

Coffee adds a lot of flavor to the red eye gravy. Use a freshly brewed, unflavored variety that you enjoy the taste of! You can use caffeinated or decaffeinated coffee grounds.

Butter helps to develop the sauce and add richness. Not all country ham steaks or slices will render a lot of fat, so adding some butter can make up for that. If you’ve got it on hand, you could also use bacon grease.

Some recipes only use ham drippings and coffee. I find, though, that the beef broth cuts some of the bitterness from the black coffee and makes the gravy a little smoother.

How Do You Make Red Eye Gravy?

Nearly all recipes for red eye gravy call for only two ingredients, but over the years southern cooks have made their tweaks. Some cooks replace the coffee with water, iced tea, espresso, or cola. Others add pinches of brown sugar, black pepper, or cayenne.

I recommend trying the recipe as is, then recreating it using your own preferences and creativity. Let me know what changes you made in the comments below!

The most delicious way to enjoy red eye gravy is served over ham and sopped up with buttermilk biscuits. I like to build a sandwich by slicing the biscuit in half, dipping the insides in gravy, and layering the ham in between. The fluffy, buttery biscuits and the salty-sweet, saucy ham make for the most incredible bite EVER!

Lots of people also like to serve it on top of grits, cornbread, or potatoes!

Country ham with red eye gravy is usually made in small batches consisting of about 2 servings. I wouldn’t anticipate having leftovers, but if you do they can be easily stored in an airtight container. Refrigerate the ham for 3-4 days.

Oven: Preheat the oven to 350 degrees. Place the ham and gravy in an oven safe dish and add a splash of broth or water. Cover with aluminum foil and heat for 5 minutes, or until warmed through.

Stovetop: Preheat a nonstick skillet to medium-low heat. Add the leftover ham and gravy to the pan, then add a splash of broth or water. Cover the skillet and heat for 3-5 minutes, or until heated through.

NOTE: Country ham is a little dry to begin with, but you can really tell when you’ve overcooked it. The pieces will be really tough and chewy. Reheating might cause the ham to become overcooked, so keep a close eye on it and add liquid when needed.

What would Southern food be without gravy? If you loved this recipe, try out a few more of my smoothest, savoriest homemade gravies: 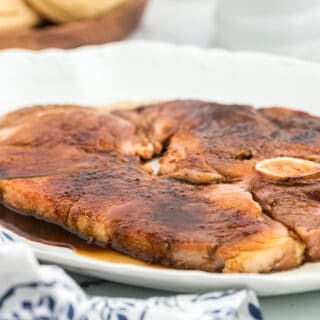 Country ham with red eye gravy is usually made in small batches consisting of about 2 servings. I wouldn’t anticipate having leftovers, but if you do they can be easily stored in an airtight container. Refrigerate the ham for 3-4 days.